Note: This recipe was originally developed by the late Fr. Steven Kozler and modified by seminarian Jeff Gadreau (Class of '00, now Fr. Lawrence Gadreau of the OCA-DOW) for use in the seminary chapel.  Because of the large number of people receiving communion in the chapel, the loaf from which the Lamb is cut is quite large (6"-7" high and 9"-10" wide).  It is marked with a seal roughly 4 1/2" square (6 1/2" total surface area).  Obviously, a loaf of this size requires a reliable recipe.

While you might not need to make a loaf this big, understanding the principles behind this recipe might enhance your baking.  This recipe can be modified to whatever size you need or your equipment allows.  The boiling water method creates a dense dough that does not create a lot of crumbs.  It is naturally sweet, does not have sizeable air bubbles and bakes quickly for its size because the dough is so dry there is not as much water to bake out of it.

During the past year since I began baking this style, I have made a few modifications.  I have slightly reduced the size of the loaves from the original recipe due to damp centers and impenitrable crusts that resulted from the baking of such a large loaf. 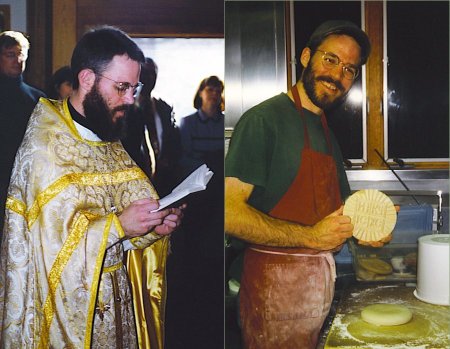 Matushka Linda Kozler:
I have a hard time knowing what to say-- except that Steven simply loved to bake prosphora. When at SVS he always baked late at night (it was when the refectory was available) and these late nights ended up being a good, quiet time for fellow students to wander down and talk with Steven late into the night about the deeper questions in life. Steven dearly loved to delve into the depths whenever the possibility presented itself, so he grew to love these late prosphora nights. After graduation, when we moved to Connecticut and Steven had the parish, he continued to bake the prosphora late at night, not because he needed to do so, but because he had grown fond of having the quiet in which to work. Silence was home to Steven. He loved to pray as he worked the dough, as he prepared the bread of sacrifice. He was baking prosphora the night he died, a thought which comforts me greatly, because it was something he so loved to do.

But as for an actual tribute to HIM, I feel that the truest (and most exquisite) words ever spoken of my beloved husband were delivered by his friend, Fr. Timothy Blumentritt, in his funeral homily:

Every man ordained a priest in God's church is called to preach the Word of God, to proclaim the Gospel in season and out of season. But, no matter how different or varied the circumstances in which he preaches, someone has said that-in the end-every priest really only has one sermon to preach-one theme song-one word that God speaks to us through him.

In Fr. Steven's words and in the example of his life, he HAS spoken to us a concise word from God-that word is "love." Love was the constant theme in Fr. Steven's preaching, in his conversation, and in his actions. I sometimes asked him "How are you going to preach about love (because I knew he was going to!) from this or that text (the story of Jesus sending the demons into the pigs, for example, which comes up a couple of times a year)." But, he would do it and in this case when he shared with me the text of his homily, he wrote, "As you might expect, I dwell here upon love...namely Christ's."

Fr. Steven took love seriously. And it was not just any old garden-variety love either, for, of course, it's painfully true that today we can't get away with speaking about love simply and without qualification. Even words about the highest love, the love of God the creator and sustainer of heaven and earth, are words that some people feel free to slap onto the bumpers of their cars or worse. Speaking about love can be simply cheap talk or self-indulgence. To some people, love means affirming whatever I want to do without any thought of sin or repentance. But, in truth we can say that Fr. Steven knew what genuine love was. Several times he described to me the almost palpable awareness of God's embracing love that-even as a child-he would experience when leaving the church after Mass and in particular on the day of his confirmation. Fr. Steven insistently believed that God loved him personally even when he couldn't-and even when he stopped trying-to "feel" it. He doggedly maintained his conviction-sometimes against all external evidence-that "everything is about love and...salvation through it." Furthermore, he really believed that God's love was not his own possession to stockpile but that having received it as a gift he also received with it the mandate-not the suggestion, but the mandate-that that love be made present to everyone and everything within the scope of his life. Some people imagine that if love is to be genuine it should be mostly spontaneous and effortless, but Fr. Steven knew that true love in this world is born of struggle. And he did struggle passionately-even violently-to be faithful to the bonds of God's love as it has been revealed to us (and in the only way a true Christian can choose to understand it)-in the cross of Jesus Christ. Recently, Fr. Steven concluded a note with these words: "Our life is not in poetics or nice theology but in the brutal necessity of our surrender to the cross...what else matters? It was signed, "Your struggling co-worker Steven." That our co-worker Fr. Steven was a genuine shepherd of God's flock is revealed in the following words in which he reflects on his short but intense pastoral experience:

Some of this may seem self-evident, and it is, but it's difficult to remember [it] when we are working in our parishes and feeling disregarded or even hurt by our parishioners. We are promised a cross in the Christian life, and as a priest I am pretty certain that means I am to be crucified by those whom I am called to love. But I do not have it in myself, I do not have the power, to flee from judgment, resentment, and anger when I am being crucified, if I am being crucified alone. And I know [that] I will feel alone if I have not made the effort to find myself in God, to pray to him, to read his word, to love his cross and find his peace.

These are the words of a true pastor, a man willing to take up his cross for the sake of love. Fr. Steven often shared good quotes that he found and he sent this one recently: "Fortunate is the man who is broken and offered to others, who is poured out and given to others to drink. When his time of trial comes, he will not be afraid. He will have nothing to fear. He will have understood that in the celebration of love, by grace, man is broken and not divided, eaten yet never consumed." Fr. Steven is that fortunate man today. His time of trial has come, he is no longer afraid. His life has been offered to God. When Fr. Steven was ordained only a short time ago, he stood in the middle of the church covered-as are our gifts of bread and wine-by the aer. He lived out that sacrificial image in the all-too-brief lifetime that followed, and he lies here before us today with his face-his own personality, so to speak-shrouded with that same aer, yet holding in his hands the Holy Gospel and the cross by which God's own face is revealed to the world. We pray that God in his love will find Fr. Steven's life to be an acceptable offering inasmuch as it truly reflected the one and only offering that can be acceptable to God-the broken body and shed blood of his beloved son, Jesus.

Brothers and sisters, as the routines and details of our earthly relationship with Fr. Steven gradually recede from our day-to-day reality, let us continue to hold him in our hearts and in our minds. May God's word to us through him abide in our hearts and make him present there. Let us never think of Fr Steven without thinking of the way he was determined to both rejoice in and to manifest God's love. Better still, let us follow Fr. Steven's example. Let us struggle-even violently- to be receptive to the life-giving love of God, let us accept the mandate to love one another and extend that love to the poor and needy, to the outcast and the downtrodden, and even to our enemies. Let us each willingly embrace the "brutal necessity of our surrender to the cross." And if we take up this struggle more fervently today, tomorrow, and the next day, one day at a time, until the day on which we each lie where he lies now (as we inevitably will), then, by our struggle-even unto death-we will have said our resounding "Amen." to the word that God has spoken to us through the life and death of HIS servant, the Priest Steven. May his memory be eternal!